Just under two weeks ago I launched this web site, and the Twitter feed that now has 75 followers. As indicated here, the idea of Love 30 Canada is to formally extend the phenomenally successful 20’s Plenty for Us campaign to North America. To that end I’ll be spending a day or two in London next week with some key advocates for 20 mph speed limits. The point of the trip is some unrelated business, but I couldn’t resist staying on at my despite the considerable expense.

In the company of 20’s Plenty for Us co-founder Rod King (who you can see and hear here) I will be attending the AGM of the RoadPeace national charity for traffic victims, if all goes as planned. You can learn more about RoadPeace and the European Federation of Road Traffic Victims in the video at this link to a talk by RoadPeace founder Brigitte Chaudhry.

The main point of the London 20mph junket is to learn as much as I can, in the space of a day or two, about advocacy strategies that can help ensure the success of 30 km/h implementation on Canada. The 20’s Plenty for Us campaign is extremely effective, with over 300 local campaigns in the UK and a steady wave of implementation, including a recent victory in Edinburgh, and potentially all of Scotland. I’m confident that we can build rapidly on that success here in Canada. We’ve already got the bold example of Toronto and East York, where 30 km/h limits are being implemented on residential streets in 12 wards.

The plan is for Rod to take me to meet London Campaign Co-ordinator Jeremy Leach, who produced a terrific report (PDF) on London 20 mph progress in March 2015. And I think we’re going to meet some Camden borough campaigners including Councillor in charge of transport Phil Jones.

Those encounters should  give me a ground-level perspective on Love 30 advocacy strategies, including the coordination of a national campaign. Rod has asked me to send some questions in advance, and I welcome any that you might have. (It’s best to send me a tweet, or you can email me here.)

If Love 30 Canada continues as planned I may soon be asking for advice on things like interactive maps and discussion boards. But for now you can help most by donating to this campaign (and to Vision Zero Canada) via PayPal. Since I’m a self-employed researcher/advocate this can only go forward with your financial support. And I’m no good at raising money, so thanks if you can step up with any spare change, fundraising efforts, leads to sponsors and grants, or paying invitations to speak or consult. Your support as a founding sponsor would never be forgotten!

This site uses Akismet to reduce spam. Learn how your comment data is processed.

DONATE … and get cool stickers 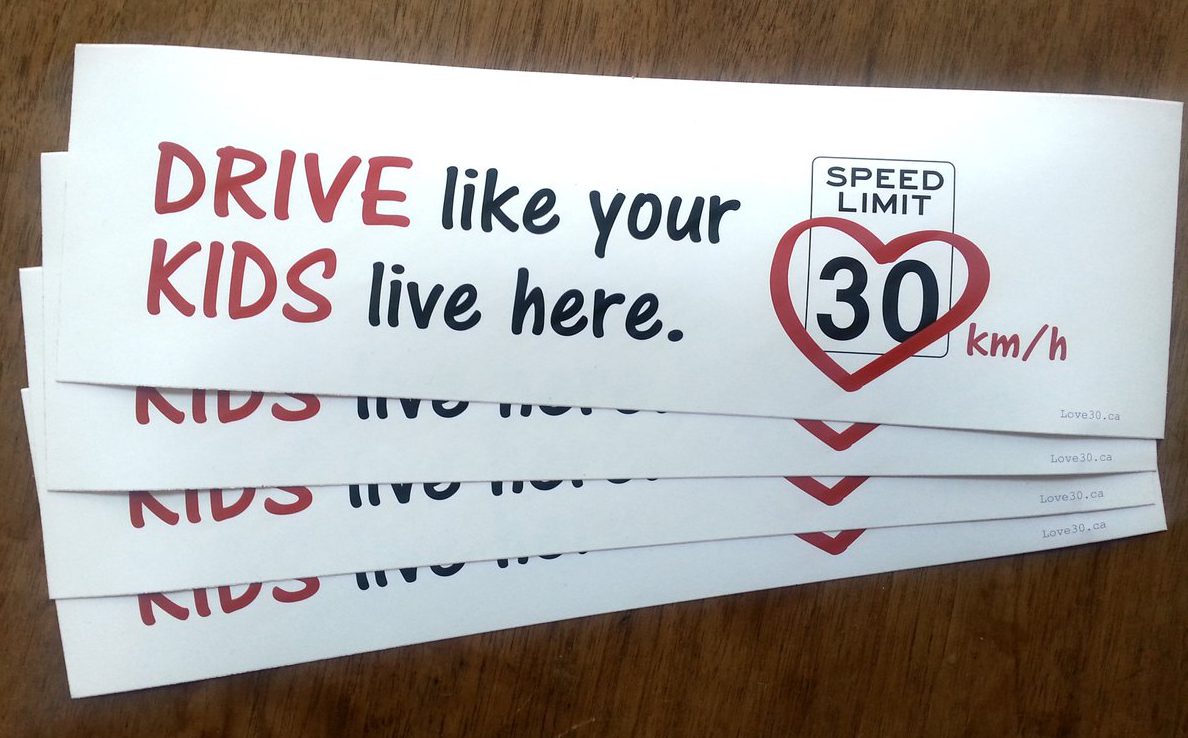